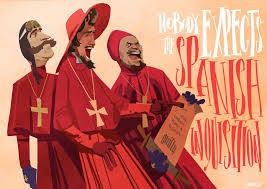 Really overall going in and "Nuke their ass and take the gas" type attitude
really does no good. There is conflict of interest, or who's interest and whose
related to what interest. You really can't just jump into this mess after ISIS
and expect everything to workout overnight.
I'm sure you can see the issue of not being able to do anything,
knowing it will take years and asking who will pay for it.
You know we can't do another Iraq!

Being the time, it should be a local issue and resolved there.
Sort of like how other foreign countries see the KKK here, if
they came to be like ISIS. The other countries would expect us
to fix our mess, income pending the result.
But if they would have to jump in to get the KKK to stabilize the
US Dollar making life better for all, you would see the issue as it is now!

But I hope people see what I am saying.
Would you of underestimated the KKK in America
if someone else told you they are a threat and we need to do something.
Or would you see it as a local issue as most overseas see the KKK as?

Well many did not expect the Spanish inquisition!

~~~~But are the days of the inquisition over? Unfortunately not!
An inquisition occurs when people who hold power over government or
government institutions decide orthodoxy, decry all challenges to it and
then use their power to punish those who dare to question them.
Today, one need only question the theory of evolution on a
school campus to feel the wrath of the “Secular Inquisition.”
http://pastormattblog.com/2013/01/03/no-one-expects-the-secular-inquisition

No One Expects the Spanish inquisition!

More noted in small towns, how many tend to bring in more high
dollar places that many can not afford only to have those places
go out of business 3 or 4 years later.

There is no Inclusionary zoning. It's all for the rich only!
That thinking keeps the towns growth at bay being the mass
of poor can not reach those high dollar places with their income.
They just drive by those places and wave at them "Bye high prices, bye!"
with the business owners wondering why the sales are low.
Yet many small towns work at changing their zoning laws to benefit the rich.

"Inclusionary zoning, also known as inclusionary housing, is an American term
which refers to municipal and county planning ordinances that require a given share
of new construction to be affordable by people with low to moderate incomes."
http://en.wikipedia.org/wiki/Inclusionary_zoning

There is a real need to help the poor. They tend to pull down most sales
and more cost in tax use as they don't make a living. So others have to pay
for the living of them or pay for the non living as the town is brought down
to their level as many homes start looking like a squatters community.
Many people in town walking in town without cars, homemade cars, homes
all around "Redneck engineering" in plain sight of the rich people from other
towns the rich try to bring in by making high dollar places.

Inclusionary zoning is a must in small towns. It keeps your labor force
stable and keeps businesses. As the city grows the wages need to also,
thus the less usage of foodstamps, tax dollars and the need for Inclusionary zoning.

Why not just pay the workers better so the many poor could afford things?
I don't know. But they will have to with inflation going up with wages the same.

Many like in my town work hard and make the same pay.
Most raises here are like $0.09 a year.
When I worked at Walmart it took me 4 years to get $0.36
more an hour pay. Which points at the issues of minimum wage retirement,
that is a whole issue itself!

In the end the poor does rule, it's best to not make people poor!

For the most part I am sure noted all over the Middle East about
how ISIS just comes and takes over a place pushing their type of fear,
into the places they take over for a time.
Fear like Hillbillies in the backwoods give to the city foke.

In actions like cutting off peoples heads. Like they are just too stupid to
think about the consequence of doing such a thing even Putin in Russia hides
his doings. How stupid do you have to be to go out there and do that stuff
ISIS is doing. Even a shoplifter at Walmart hides what they do!

In view I would say really most Arabs see ISIS as Arab Hillbillies
and need to be wiped off the face of the earth!

I hope more people over there will not take what they do,
and put a end to this stuff. If you know a ISIS over there let him have it!
Time is short to be governed by ISIS Hillbillies!
Don't squeal like a pig for ISIS!

Posted by WalmartRamen at 11:59 PM