Walmart Area 71 and secerets and beyond! 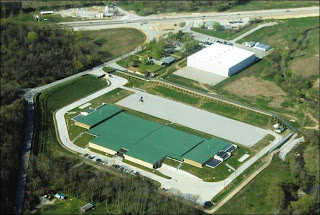 If you work at Walmart you know this but to the shoppers & everyone else.
Here is some secret info about Walmart.
For one their data center, called "Area 71"

Area 71 is the unofficial title for Wal-Mart's 125,000-square-foot (11,600 m2) datacenter which is located in Caverna, Missouri near the Arkansas border. The datacenter has a supposed capacity of over 460 terabytes of data, or 460,000,000,000,000 bytes of data. Area 71 is built directly on top of bedrock which gives it maximum strength to withstand many natural and man made disasters. It is also self-sufficient with generators and the capability to retain data link with the Wal-Mart network using copper wire, fiber optic cable, or satellite communications. Some speculate that the datacenter was created to link video footage with customers buying products to build a database as to when and what kind of person buys a certain product.[citation needed] It can also be used to develop trends in purchasing before major events (i.e. natural disasters, holidays) so that Wal-Mart executives can better stock store shelves in anticipation of this event.

Wal-Mart also uses Area 71 to control many functions of Wal-Mart stores.
This includes turning the lights on and off, adjusting the climate control, and
playing the in store music. Also run from the data center is the computer
system that employees use to “clock in” at each location and also provides
email to keep employees informed of events that are pertinent to their job function.
http://en.wikipedia.org/wiki/Area_71
http://cryptome.org/eyeball/walmart/walmart-birds.htm

***Note if you go to the food aisle you will see one post in a strange place
with a black digital sensor on it. That is the thermostat. It only reads the temp.
Yes I dared to put a lighter up to it for a few sec & ran!

Area 71 has it's own weather system & can warn each Walmart if a bad
storm is coming their way.

It holds info of what the workers bought, relating to their discount card!
They know that you buy!!!!!!

And how many times you checked your hours worked on the clock in.
I messed with them once each day I checked my time worked, like 1 for the
first day 2 times for 2th day etc. I went up to 30 I think. Then I went to
random checks, like it was some code! Someone in Area 71 was seeing
what I was doing!

Also I am sure it holds records of what you bought, as in your receipt etc.
That brings up another scary fact of info from the 1990's. There was a story
about a hacker that hacked into Walmart & found out their cashier scan was
able to read your face. He put a virus in there that would print your name on the
receipt if you payed with cash. This is true, because I had a receipt like that in
the 1990's. I don't have it now. I did not think of it as bad at the time.

Also there was info about walmarts spy satellite then & now!
In 1987 The company installed the largest private satellite communication system
in the U.S., linking the company's operations through voice, data and video communication. They did not say it was a spy satellite with a camera.
Can they spy in the workers at home that might start a union?
( The info comes from Walmart. I can't put the link to it!
Search for up "corporate.walmart" "our-story/heritage/history-timeline" )

Beyond Area 71 is their new data center.
In 2011, Wal-Mart, which announced in July that it would build a
210,000-square-foot corporate data center in northern Colorado Springs,
has finalized its purchase of the site paying about $5.3 million for the land.

Wal-Mart spokesman Josh Phair in Denver confirmed that the retailer has
finalized its purchase but said he couldn’t add more details. Wal-Mart officials
previously had said construction on the project would begin in October and be completed in late 2012.
http://www.gazette.com/articles/site-125693-center-mart.html

***Also a strange secret fact. Each Walmart runs on it's own Walmart power supply.
They don't use the city's power grid, they have their own.
I know where the backup generator in my towns Walmart is, it's down the side
road a wee bit. I thought about going for a drive & following the lines if I can.
Really I do want to know! I am just afraid it might end up at something like the
hadron collider, dark matter kind of stuff! It just kind of fits.

Lastly I need to note that Walmart did or does have a strong tie with the military
etc. They had a push for the GOV for those RFID chips.
That is a whole other story there!

Now you know, but there is never enough to know!
Posted by WalmartRamen at 10:42 PM